I finished the book News of a Kidnapping by Nobel Prize winning author Gabriel Garcia Marquez this last week. I read it to get a perspective on the kidnapping in Colombia that was, and still is, a problem in that country. It is a non-fiction book detailing the experience of several kidnapped people and their families' efforts to free them in the days of Pablo Escobar. It was very informative but sometimes hard to follow if you have no prior knowledge of the political system in Colombia. The author is Colombian, by the way.

There were a few interesting points made, I'll quote the first directly. . . . ."a human tragedy for which the consuming nations bore primary responsibility." It seems that the slant here in the States is to blame the southern countries for the drug problem when demand for drugs begins here. A point contradicted, understandably, by the author. For there to be a product, there has to be a demand for it, although I would have to weigh in that the blame should be shared.

The next mind-boggling fact was the amount of violence in Colombia. In contrast to Chicago, which has been making headlines for the murder count, the city of Medellin in the first two months of 1991 had 1200 murders! These were the days of Pablo Escobar, who paid adolescents from the slums to kill police.

One thing that I found interesting was that although the conditions were difficult, the women held hostage were not harmed physically. Here in the States I can't think of one kidnapping case that was not sexually motivated, while in South America these kidnappings are used as political leverage or for money.

I'm currently reading a book that I got as a free download titled All Roads Lead to Austen and I can't put it down! It has so many elements that I can relate to. The author, Amy Smith, is an expert on Jane Austen, with a PhD and a professor position in a university. She travels to Central and South America discussing Austen's books with groups of people in six countries for their take on the novels. I love Jane Austen, and I've been enjoying how she integrates the cultures of the local people into her experience.

Why would you go to South America?

When I had decided, at the ripe old age of 21, to move to Ecuador, S. America, a lot of people in my tranquil suburb of Wisconsin could not understand my desire to move away, especially to a developing country. What can I say? What DID I say? The more people responded negatively to my idea to go, the more I stubbornly dug my heels in and made it happen. Which says a lot about how I live my life, I guess.

I don't regret it, even the bad experiences I had, because the good far outweighed those times. It is a spectacularly beautiful country with three distinct regions, the mountains (as in the Andes), the coast, and the rainforest. There is a large indigenous population that speak the Quechua language, but Spanish is the principal one spoken. It is a relatively safe country to visit, although the biggest concern is pickpocketing, but if you use common sense you will not have a problem. I actually saw tourists wandering around with money hanging out of their pockets- HELLO!

Poverty is prevalent, but the land is very productive, and a diet of rice and beans keep the people well nourished. The country exports bananas and roses, amongst other things, and you can find all kinds of fruits and vegetables in the open air markets. When I visited last, seven years ago, the average monthly salary was $120! But food, utilities, and gas were cheap. Plus with public transportation everywhere you don't need a car.

Along with the good, comes the bad. When I lived there 19 years ago, a man, Colombian born, had been captured after allegedly raping and killing 300 women, beginning in Colombia and then in Ecuador. The longest prison sentence in Ecuador is 18 years, no matter what you do, but justice has a way of working it's way around, and the man was murdered by relatives' of the victims. This news was ironic to me because I moved to Ecuador from the Milwaukee area around the time of Jeffrey Dahmer, and everyone in Ecuador knew of him. But did we ever hear of their serial killer, who killed approx. 300? vs. 17 from Dahmer?

Okay, I'm going to lighten up this post with a funny story. On Mondays I work out at the local gym in a core strengthening class and was behind a cute little blond with a perfect body. I consoled myself with the fact that she had a little gut hanging out until the instructor announced at the end of the class that she was pregnant. I should be depressed but I'm too busy laughing about it!

Last but not least, I'm fostering the world's CUTEST kittens for the shelter. There are four of them, but here are pictures of two. 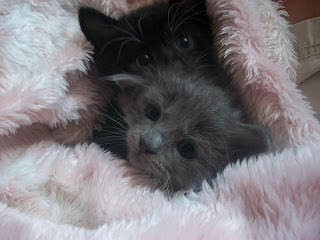 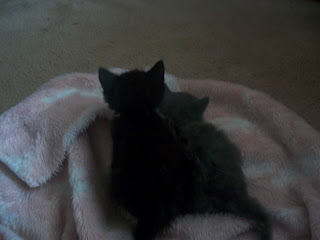 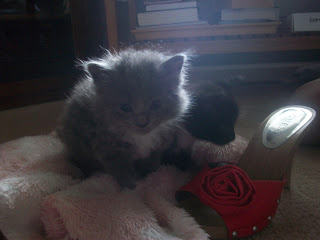 See! You made it through that post to get this reward- wasn't it worth it! 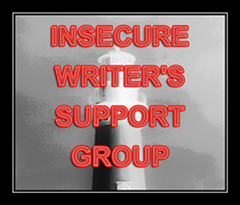 Today's the day for our writer's support group, and my insecurities this time around have come full circle. I went from feeling like I'll never be good enough- to I have a great story, it needs more work, but it's still worthwhile.

While it's never pleasant to hear you still aren't finished and what might be wrong with it, it's also equally wonderful to find a cheering section.
I've learned this month how important finding readers are in the process of writing, because after a while, it's hard to see the mistakes. I had looked at those words I had written too many times to know if I was conveying what I had meant to.

One of my writing group partners is a nurse too, and she's far more advanced in her writing than I am. She pointed out that my writing tends to read like a nurses' note. Dry and factual. I'm working at writing in the "fluff", as she put it. Each point has helped me take a baby step in the right direction. Do I think I can be a good writer? Yes. Am I one now? No, but I'm getting there. Thanks to all who have helped, encouraged, critiqued, and supported me along the way!
Posted by Tess Julia at 7:06 PM 30 comments:

Sometimes fact can be stranger than fiction.

In all my years as an American citizen, I don't recall ever meeting, or even seeing a politician. Not that I sought them out, mind you, but down in S. America in the rainforest, I came face to face with a presidential candidate. He was campaigning and enthusiastically approached us in the street. After he walked past, my husband told me his history.

Turns out he used to be a military general, and headed a coup when my husband was a child, kidnapping the then Ecuadorean President, Leon Febres Cordero. He negotiated never being prosecuted and eventually released the president unharmed, but not before publicly humiliating him by broadcasting the president crying like a baby. Can you imagine a U.S. president being kidnapped and the kidnapper later running for president?

All normal in the Southern Hemisphere.

I just started reading a book which I'm using as research for my own novel. It's titled, News of a Kidnapping by Gabriel Garcia Marquez, a Nobel prize winning Colombian journalist. (Also author of Love in the Time of Cholera) I haven't gotten far but it's clear he's a talented writer. Bonus when my research is enjoyable! It documents the real-life accounts of 10 kidnapped people in Colombia in the days of Pablo Escobar. I'm hoping to get a feel of what the ordeal was like, since fortunately I've never been kidnapped myself.

Additional note- I am now the proud owner of an E-reader! Never thought I'd be in this place, buying geeky tech things and becoming proficient at using them. The journey wasn't easy- there was some kicking and screaming, but here I am. I guess it took putting my favorite things (books) on it and I was lured in.
Posted by Tess Julia at 7:01 PM 16 comments: 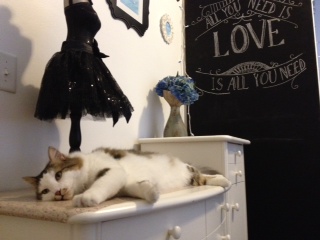 Tess Julia
Unpublished writer, RN, mom, wife, nature lover, owner of 3 dogs and 2 cats (it was an accident, I swear!), and future backpacker?